My Half Marathon and The Convenient “Sports Injury” Excuse 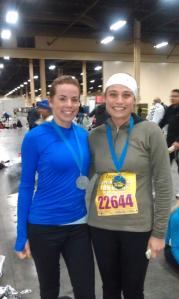 After finishing the Vegas Rock & Roll half marathon.

This post could also be titled, “When Self Delusion Makes You a Dumbass,” because, honestly, why had I not gone to the doctor?

But, there I was, training for a half marathon, my feet occasionally swelling up in pain. Being confused because my “sports injury” would magically switch sides.

Here’s the thing, in November, training for my half marathon, I felt powerful. I felt strong. I was running, doing boot camps, doing yoga, trying acro yoga, writing a book and making progress at work. I was a 28-year-old superwoman, elated that I had hit my stride.

The first weekend in December was the weekend of my half, and I rocked it. I made a decent time and felt great doing it. Afterwards, trudging back to the hotel, my swollen, sore feet were screaming. The half was a sort of turning point for me because I couldn’t just ignore the pain that seemed to flare up anymore. On bad days I started complaining to people who would listen. The general consensus was a torn ligament or a stress fracture. Some weeks it was fine, other times people would ask me why I was limping.

Still, STILL, I didn’t get it checked out. I barely even stopped working out even though I figured maybe a little rest would just heal it.

This entry was posted on April 7, 2012, 7:00 am and is filed under Fitness, RA/RAD, Running/Marathon, Symptoms. You can follow any responses to this entry through RSS 2.0. You can leave a response, or trackback from your own site.