Thanksgiving Update: So Many Things To Be Grateful For

My Thanksgiving and the last week has been awesome, and I’m so grateful for it.

My marathon training had been off to a slow start as I was dealing with some symptoms, fatigue being one of them. It was really hard to motivate.

My last two long runs – 10 and 11 miles – have been great. I did the second long run on Thanksgiving with my parents’ dog. She’s a great motivator & keeps me going fast.

So now I’m feeling like a marathon may actually be a possibility for me. I’ll be getting X-rays in February, so I’ll be able to see if I’m doing damage, but so far I feel great. I love the feeling of getting out and running. I’m so grateful to live in a place with such awe-inspiring running trails.

Then I spent the rest of Thanksgiving cooking – 2 gluten-free, dairy-free pumpkin pies, 1 gf, df pumpkin bread, and a grilled zucchini/squash salad tossed with garbanzo beans and olive oil. Yum! My family was very supportive of my restricted diet (with a little teasing, of course!). I am consumed with gratitude for my supportive family and friends.

Also, perhaps one of the biggest things I’m thankful for: my symptoms have been really minimal. AND, I’ve gotten the hang of the syringe, so self-injection is finally pretty painless. The verdict: I definitely like the syringes better than the pens. Way less pain, bruising, swelling and uncertainty.

I hope you all are off to a great, pain-free start to the holiday season.

Stabbing Yourself In The Thigh Isn’t Easy…Take Two 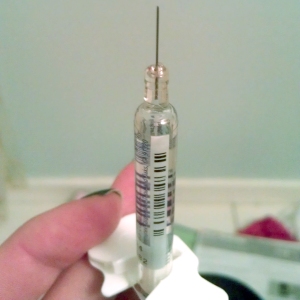 The needle was like 5x that size in real life 😉

Alright, I’m not proud, but I can’t lie to you guys: It was really freaking hard to give myself my first syringe injection of Enbrel.

I’ve been using the pen injectors since March – 8 months! – but had been having problems with post-injection welts and bruising and button delays/glitches (I would press the top part of the pen and nothing would happen). You can read more about that here, here, and here.

My marvelous nurse (who clearly thinks I’m tougher than I am) thought that I may be ready to try syringes. According to her, patients say the syringes are less painful. Also, since you’re in complete control, you can’t have glitchy buttons or not know if it worked.

So, she gave me four syringes and told me to try it out.

I got home on injection night from a really great dinner date and set up. I was feeling pretty confident. I’d even had some wine at dinner, which I thought should make things a little easier.

I let the medicine get to room temperature, washed my hands, sat down, put rubbing alcohol on my thigh, iced my thigh, pinched the skin, went for the “dart-like motion” to inject myself…and froze. So I tried placing the needle on my thigh, thinking I’d just push it in…froze again. And then cried because I was frustrated. Why couldn’t I just do it?

I texted a friend the pic you see to your left and said I needed a pep talk, to which he replied, “Yikes. You’re a courageous woman. Find the life energy in your fear.”

I don’t know about life energy, but the validation that it was a huge, scary needle made me feel a little better.

I tried again. Still couldn’t make myself do it. At this point, it’d been about an hour and it was a little past midnight. Frustrated and wishing my cat had opposable thumbs and could do it for me, I called my little sister.

She’s as wussy about needles as I am, but she does have an epi-pen (that she’s never used), so I thought maybe she could do it for me. She said yes, I could come over to her (college) apartment and she would try her best to stab me in the thigh. I said I’d give it one more go and call her back.

The thought of driving over to my little sister’s and making her do it gave me renewed inspiration to man-up and do it myself. I would never want to give her an epi-pen! I knew that it would be hard for her to do it, even though it’s not her thigh.

So I looked on YouTube and found this video. Seeing that this big guy was freaked about self injection too made me feel better. Also, his reaction – actually, not so bad! – gave me confidence.

I didn’t do the “dart-like motion,” I just gently put more and more pressure on the needle until it punctured my skin and the full thing disappeared into my thigh. Success! I took a breath and pushed the liquid into me slowly. It didn’t hurt, it didn’t sting, it didn’t even bleed when I pulled it out.

It’s less painful then the pen at least. I think it will go a lot better this week, since I know what to expect.

And for those of you about to self-inject for the first time, I am here to report that it may be psychologically difficult to give yourself an injection, but it really truly is ACTUALLY, NOT SO BAD.

Maybe this is the answer to my last blogpost on the woes of self injection. Replacing needles with lasers and a puff of air? Sign me up!!